Celia Rico admires deeply Yasujiro Ozu’s films and admits that partially thanks to his movies, she plucked up courage to make a film with few characters and a table.

‘Every time someone read the script and suggested I let the characters out of the house or added other conflicts to the story, I thought to myself: I must revisit Ozu.

I remember how important it was, during the whole process, to watch Ozu’s films, in particular his first talkie “The Only Son” which I didn’t know till then. The film opens with a sentence which has always stayed with me: Life’s tragedy starts with the bond between parents and children. To me it was a surprise to find out that the widowed mother who worked in textiles, opposed to the idea of sending her son to study in Tokyo. Yet when the son leaves home for the first time, he doesn’t dare to tell her -even much later- that life in the city isn’t what he expected. I think at the time I wished that Leonor and Estrella, instead of watching a series sitting at the brazier table, could have watched O-Tsune and her only child on the screen. I’m sure they’d have understood them.

Not only “The Only Son” but almost in most of Ozu’s films, the children concern themselves with not having met their parents’ expectations and the parents worry about their children’s life not being fulfilling enough. And so life happens and everyone is worried about everyone else.

I thought about this a lot when writing the end of the film. It was hard for me to find the right dialogues for the scene when Leonor admits to her mother that she’s not happy in London and for the words that Estrella might use to reply to her daughter in such a delicate moment.'

'Personally I too had to find the right balance between words and silence so that Estrella would be useful to her daughter. Thanks to “The little virtues” I understood that Estrella was ready to help her and let her go again without qualms because some days before, while she was sewing the dancing dresses, she had been able to connect herself to life through her vocation, as Natalia Ginzburg describes:

“For them (our children) we have to be a simple departing point, a trampoline from which they’ll jump off. And we have to be there to give them a hand, even if it’s not required. Our children should know they don’t belong to us but we do belong to them, always available, present in the next door room, ready to answer somehow to their questions and requests. And if we happen to have a vocation, one to which we have been loyal and loved it throughout the years, performing it with passion, the love we feel towards our children can be kept away from our hearts and not be perceived as a possession. [...] If we don’t disown that vocation and keep our loyalty, we’ll be able to let them thrive away from us, surrounded by the shade and the space which is required for a vocation to prosper, like a bud, like a being. This might be the only possibility we have to help them out in their own search of a vocation so as to identify it, love it and perform it passionately, since loving life breeds love for life.”

Excerpt conversation Leonor and Estrella after the accordion [81’]

’The little virtues’ (1962) by Natalia Ginzburg 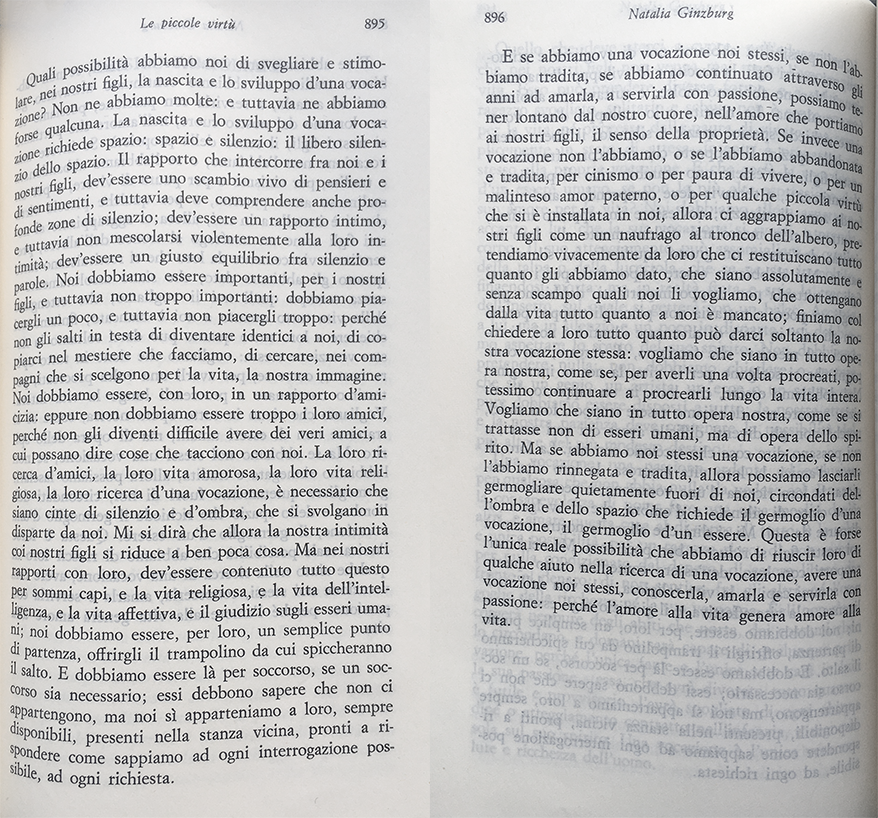